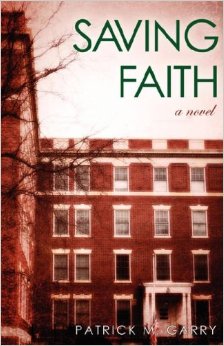 Patrick Garry’s readers know that like a clever Chess master, he likes to start a story with one or two standard openings. Sometimes he puts the plot right in the face of the readers telling them what the book is going to be about and what problems will need to be solved for it to reach a successful conclusion. Other times, he starts with one or two strong characters that readers can identify with and once they are comfortable with them, he proceeds to weave them into the plot. The beginning of “Saving Faith” is somewhat different. He begins by introducing two characters that have little or nothing in common. Jack spent his life in an orphanage and is now working as a repossessor for a used-car dealer; while Ev was once a successful journalist but is now down on his luck and disgraced. Chances are, the two would have never met except that Jack mistakenly towed Ev’s car, which leaves him with the unpleasant task of delivering the bad news to him in a bar. To Jack’s surprise, Ev takes the bad news with alcohol-fueled indifference rather than anger. In the process of arranging for the reclamation of the mistakenly towed car, a process that will take several days, the two become friends of sorts.

So that’s the beginning. The introduction of two serial losers in the story; losers whose lives don’t seem to be going anywhere. Not much to go on for plot development. But wait. While the pair is killing time in the courthouse chasing paperwork to reclaim the car, they sit in on a court hearing involving two women who will change their lives forever. The two women, a nurse and a troubled young lady named Clare, are asking a judge to keep alive a comatose patient whose true identity is unknown, and has been given the pseudonym of Faith Powers. When the hearing is over, Ev follows the nurse, his journalistic instincts in full gear. Faith’s story has not yet been well-publicized, and he figures that by doing so, his failed journalistic career could very well be redeemed. Meanwhile Clare, who is fanatically obsessed with Faith, becomes intrigued with Jack, mainly because she believes that Jack’s role as a repossessor makes him some kind of modern moral prophet.

So there you have it. With all the characters in place and the plot described, the story begins to unfold in a brisk manner with all the subplots twisting and turning unexpectedly as is Garry’s style. Along the way, there is love, romance, successful or unsuccessful, intrigues, affairs-Illicit or otherwise, betrayals, white collar crime galore, action, adventure, and even a few murders. And the ending? Well, that’s the best part. It is a pity I can’t reveal it but I assure you, the readers would not be happy if I did. Let me just say this: when you’re almost finished reading the book, take a moment or two and jot down your prediction on how the story will end. Afterwards, read what you wrote down. I can almost guarantee that your prediction will be wrong.

I became a fan of Patrick Garry after I read his book “A Bomb Shelter Romance.” I like the characters he creates, I like the plots he concocts, and in general, I like his writing style. He also manages to keep one step ahead of his readers at all times, thus sustaining their interest without revealing too much of the ending—a skill all good novelists possess.
Not surprisingly, his eight previous novels have garnered numerous literary awards.

As I stated in the previous book review, “one national book review called Patrick Garry ‘the best unrecognized American novelist writing today.’ In my opinion, he is a talented writer who is ready for prime time; and I look forward to the day when the word ‘unrecognized’ is removed from his credentials”. Bottom line: “Saving Faith” is another very readable and well-written book by Patrick Garry, and it deserves a place on your bookshelf. It’s a winner!

Saving Grace is a Kenric Books publication and was published in 2013.  It can be purchased from Amazon and Barnes and Noble and can be downloaded on Kindle.